DuBOIS — DuBois resident Nick Suplizio and local businesses have initiated a “Back The Blue” campaign to benefit the City of DuBois and Sandy Township police departments.

“Ultimately, I’m just so fed up with all of the talk going on nationally about defunding the police,” said Suplizio. “And I wanted a way for our local police departments, here in DuBois and Sandy Township, to know that we as a community stand behind them and we support them and we support what they do.”

Suplizio came up with the idea to sell “Support Your Local Police” apparel and allocate all proceeds to benefit the DuBois and Sandy Township police departments.

Aaron Fairman, of Downtown Imprints in downtown DuBois, will be making the T-shirts, both short- and long-sleeved, as well as hoodies. Chad Barnard, from CVB Media, designed the shirts and hoodies. On the front of the navy blue apparel, it says, “Support Your Local Police,” along with the names of both police departments. On the back of the shirts and hoodies, it says, “Back the Blue,” and has both logos for both police departments.

“I figured this was a great way for the community to show their support in supporting our local police,” said Suplizio. 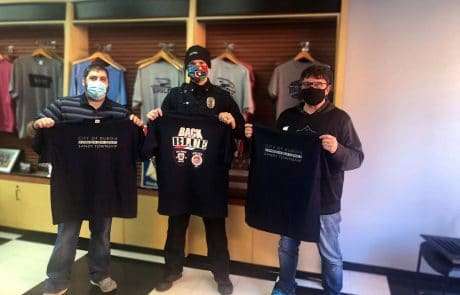 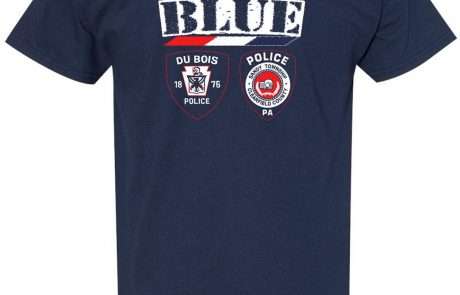 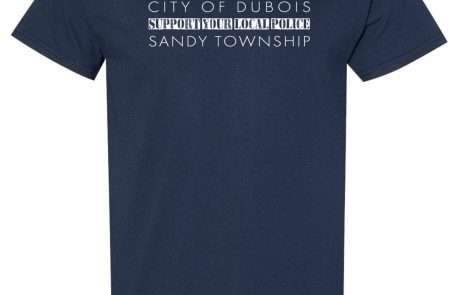 Have a design that you
would like to turn into Custom Shirts?

“I appreciate the community’s efforts to recognize our local police departments,” said township Chief Kris Kruzelak. “I’ve seen it often throughout the year on signs showing their support. Also, different organizations and people are constantly providing lunch at the station and others make donations which help us purchase some of our protective equipment. I think within the last year, where the rest of the nation was kind of against the police, our community has stepped up to support us. Every single officer has recognized that and appreciates that. I thank both of the communities for supporting both of our departments. We are all appreciative of it.”

As chief of police for the City of DuBois, Blaine Clark said “it is an honor for someone in the community to support the police department and push for the rest of the community to show their support like they always do.”

Clark noted he believes the citizens of DuBois as a whole support the police department.

“I made a commitment I was going to bridge that gap when I became the chief of police,” said Clark. “It was easy to do because of the citizens we have. I honestly believe that the City of DuBois citizens and the police department have a great relationship and I really think we are far and beyond a lot of this defund the police attitude that is out there across the country. I very much appreciate and it’s such an honor to provide police services to this community because I know we have the support and backing of the community.”

“During these tumultuous times, it is awesome to see Downtown Imprints and other local business show their unwavering support for our local police departments,” said Arbaugh. “We look forward to working with them to provide additional gear and updates for our police department. Thanks for all you do, it is very much appreciated.”

“What a wonderful way to show our support for the great police officers in our communities,” said DuBois Manager John “Herm” Suplizio. “The fact that the guys came up with the idea and ran with it is just another reason why this is a great place to live and work.”

Nick Suplizio said he hopes the campaign is a success and that the community will show their support for the local police departments.

“They’re there for us,” said Nick Suplizio. “Now it’s our turn to be there for them.”

To purchase a shirt or hoodie, visit downtownimprints.com. Orders are due by Dec. 16 to ensure they arrive by Christmas.

Original Article Can Be Found Here

About the Author: Kurt Effertz

How would you love to order?

Select this option to upload your print-ready artwork files to our platform.

Browse our designs and customize to your taste.

Let our experts help you with your design.